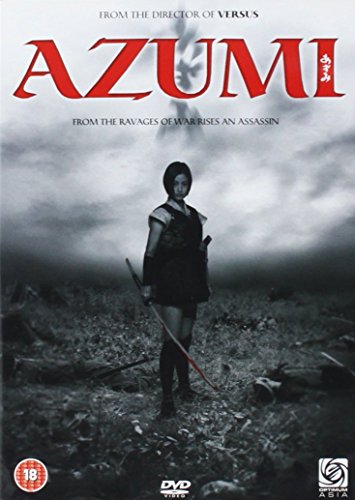 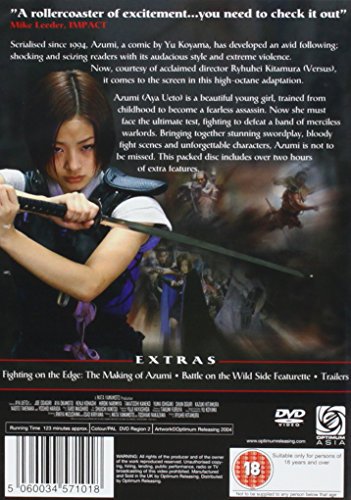 Australia released, PAL/Region 0 DVD: it WILL NOT play on standard US DVD player. You need multi-region PAL/NTSC DVD player to view it in USA/Canada: LANGUAGES: Japanese ( Dolby Digital 5.1 ), English ( Subtitles ), ANAMORPHIC WIDESCREEN (1.85:1), SPECIAL FEATURES: Interactive Menu, Making Of, Scene Access, Trailer(s), SYNOPSIS: Azumi begins the film as the only girl among 10 warriors who have been trained from childhood by Jiji, a gray-bearded samurai. One day, Jiji tells them they must pass a final test before they embark on the mission they have prepared for all these years. He pairs them up, and, only five survive, including Azumi. Led by Jiji, this small band descends from the mountain that is the only world they know. Their mission, we learn, is to stop a nefarious plot to unseat the current shogun, Tokugawa Ieyasu, by the supporters of Hideyori, the son of deceased warlord Toyotomi Hideyoshi. In other words, they are out to prevent a civil war of the kind that devastated their own families before Ieyasy wrested power from his rivals at the battle of Sekigahara in 1600 and imposed peace… …Azumi
Is Discontinued By Manufacturer ‏ : ‎ No
MPAA rating ‏ : ‎ R (Restricted)
Product Dimensions ‏ : ‎ 5.31 x 0.59 x 7.48 inches; 2.93 Ounces
Item model number ‏ : ‎ 5060034571018
Director ‏ : ‎ Ryûhei Kitamura
Media Format ‏ : ‎ PAL
Run time ‏ : ‎ 2 hours and 8 minutes
Actors ‏ : ‎ Aya Ueto, Kenji Kohashi, Hiroki Narimiya, Takatoshi Kaneko, Yûma Ishigaki
Subtitles: ‏ : ‎ English
Producers ‏ : ‎ Hidemi Satani, Kazuya Hamana, Mataichirô Yamamoto, Morihiro Kodama
Language ‏ : ‎ Japanese (Dolby Digital 2.0)
ASIN ‏ : ‎ B0002HSDS2
Writers ‏ : ‎ Isao Kiriyama, Mataichirô Yamamoto, Yû Koyama
Number of discs ‏ : ‎ 1

Be the first to review “Azumi [Region 2]” Cancel reply

Added to wishlistRemoved from wishlist 0
Add to compare
$305.00
Thebestdealscheap.com