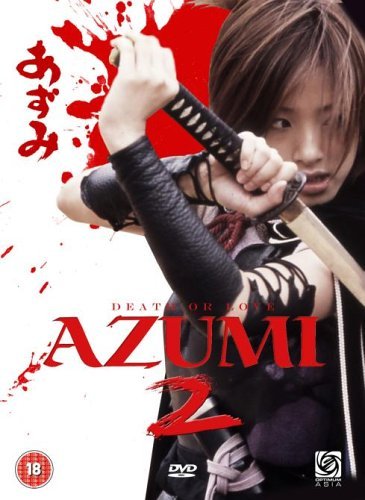 Sequel to the Japanese period action film. For their next mission, Azumi (Aya Ueto) and Nagara (Yuma Ishigaki) head towards the Kudo Mountains with the help of a beautiful female ninja (Chiaki Kuriyama) to track down and kill Sanada (Toshiya Nagasawa). On the journey, Azumi meets a young thief, Ginkaku (Shun Oguri), who resembles her first love and friend Nachi, whom she was ordered to kill to prove her worth as an assassin. As Azumi and Ginkaku’s feelings towards each other grow, Ginkaku tries to persuade Azumi to quit her life as an assassin and lead a normal life with him. Nagara is advised by Kozue (Chiaki Kuriyama) to let Azumi go her own way, unaware that Kozue has motives of her own for wanting to split them up. As Azumi draws nearer to her target, she must defeat the armies that have been sent to kill her and learn the awful truth about Kozue.
Is Discontinued By Manufacturer ‏ : ‎ No
Package Dimensions ‏ : ‎ 7.1 x 5.42 x 0.58 inches; 2.82 Ounces
Media Format ‏ : ‎ PAL
Run time ‏ : ‎ 1 hour and 52 minutes
Release date ‏ : ‎ October 17, 2005
Subtitles: ‏ : ‎ English
Studio ‏ : ‎ Studiocanal
ASIN ‏ : ‎ B0009S4VWG
Number of discs ‏ : ‎ 1

Be the first to review “Azumi 2 [DVD]” Cancel reply

Added to wishlistRemoved from wishlist 0
Add to compare
$179.00
Thebestdealscheap.com